In a report dated September 2018, the world's climate experts gave the most serious warnings. The measures taken to limit the temperature rise to 1.5 degrees were not enough, more had to be done.

We know that climate change, which is the most important problem of our time, is caused by the increasing amount of carbon dioxide in the atmosphere. The main reason for the increase is human activities, especially after the Industrial Revolution. For example, an important part of the carbon dioxide released into the atmosphere today is caused by the fuel consumed in automobiles.

According to an article published by a group of researchers in Science, planting trees is the best way to combat climate change. Because trees produce oxygen and nutrients while consuming carbon dioxide in the atmosphere during photosynthesis. Especially young trees in rapid growth process receive high amounts of carbon dioxide from the atmosphere.

According to the same article, even considering the existing cities and farmland, there is about 9 million square kilometers of land on the earth where new trees can be planted. It is possible to plant 1 trillion new trees in these lands and thus reduce the amount of carbon dioxide in the atmosphere by approximately 750 billion tons. This corresponds to the amount of carbon dioxide that humans have released into the atmosphere in the last 25 years.

Researchers say that planting alone is not enough, but can be effective when combined with reducing fossil fuel consumption and other measures (for example, expanding the use of renewable energy sources, developing clean energy technologies such as carbon capture and storage).

Every member of the Tantimber family now has a sapling! 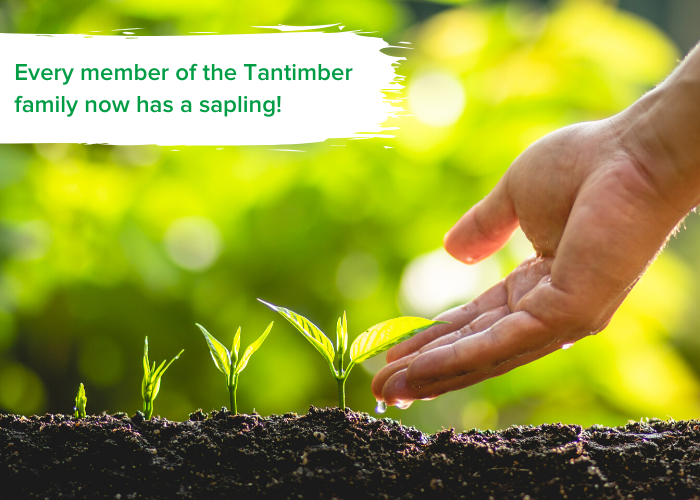 As a company that handles its raw materials from sustainable sources and applies the necessary procedures for planting new trees in place of each raw material we use, we know that we need to do more.

So, as a first step, we decided to participate in the #futurecampaign.

The Turkish Ministry of Agriculture and Forestry has launched a campaign called #geleceğenefes where 11 million trees have been planted all around in Turkey on this special day, we decided to be a part of this campaign and have planted these saplings around our factory area – as one sapling for each member in our factory and their family members.

We planted, watered and owned the saplings of pine, Indian crape myrtle, laurel, black mulberry, Leyland Cypress and black mulberry in approximately one acre of land.

Our planting campaign was accompanied by employees of the surrounding factories and their team members. Participating and supporting thank our entire team, we promise that we will continue to work for a greener  and healthier World!